Home » Member's blog » Other » Swords to ploughshares: the need to convert...

Swords to ploughshares: the need to convert to a healthier, greener economy 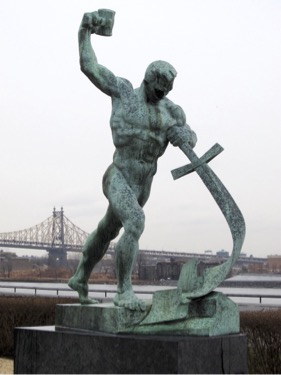 The image of the beating of swords to ploughshares outside the UN in New York is a powerful one, created by the Russia Sculptor Yevgeny Vuchetich, early, and deep, in the Cold War. It evokes the book of Isaiah in the Old Testament which says:

‘He shall judge between the nations and shall arbitrate for many peoples; they shall beat their swords into plowshares, and their spears into pruning hooks; nation shall not lift up sword against nation, neither shall they learn war anymore’.

Not to ‘study war no more’ is captured in the African American Spiritual ‘Down by the Riverside’.  We need to convert our military-driven economy to an economy which benefits people, and creates recyclable profits in human health, social and environmental-useful production. Global economies need to move from being extractive to being regenerative. Global military expenditure passed 2 trillion dollars, in 2021.  (1) Many historians have repeated the maxim of African American sociologist and Pan African Civil rights activist, WE Burqhardt Du Bois that ‘the cause of war is the preparation for war’. (2) President Dwight Eisenhower, in his last presidential address in 1961 warned about the military-industrial complex, its undue and unearned influence and its potential to distort democratic processes. It later became styled the military-industrial-scientific complex, recognizing the potential for public policy to be held hostage by university military research and technological elites.  Eisenhower drew attention to the fact that the US had not had an armaments industry until the Second World War and had relied on its manufacturers to turn their skills from the plowshare to the sword when need required. (3) 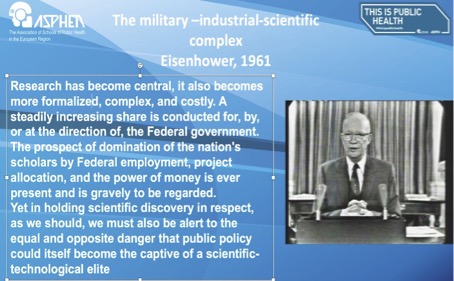 Military manufacture is the driver of military adventurism and aggression; it provides the tools for repression. During the widespread opposition to nuclear proliferation in the early 1980s, healthcare workers, under the worldwide aegis of the International Physicians for the Prevention of Nuclear War (IPPNW) campaigned against the threat of nuclear weapons, but also against the waste of money and resources. This was famously captured in Victor Sidel’s Lancet paper, ‘Destruction before Detonation (4). More recently, the Stockholm International Peace Research Institute compared the opportunity cost of military spend with the money needed to achieve the UN Sustainable Development Goals; achieving the SDGs 1 and 2, to eliminate hunger, would require 13% of global military spend, SDG4 on education, 12% and SDG  3 on health, 5%. 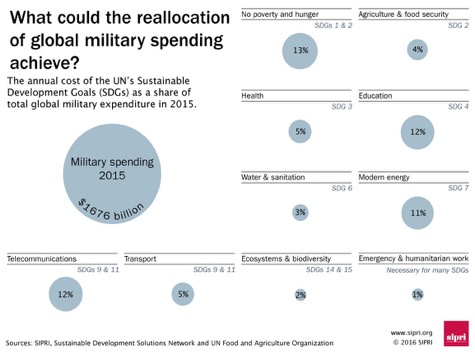 The UN report on Disarmament and Development (Thorsson report) spelled out the adverse impacts of the military-dependent economies then in a period of stagflation - high unemployment but spiraling inflation.  Military industries, although major employers, do not employ as many people for a given investment as do health, education, transport, and environmental activities. Military industries compete with other manufacturers for material resources and human ingenuity. (5) 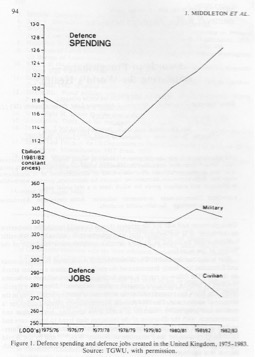 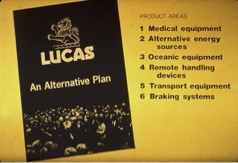 Even before the impact of the Ukraine war, military spending was on the increase. (1) There was a brief respite in military spend in the post-Cold War years and calls for a peace dividend by all parts of the political spectrum. (1, 6) There were campaigns and demonstration projects, in many countries, like the iconic UK Lucas Aerospace Shop Stewards Combine Alternative Plan. These showed how military industry could be converted for peaceful, socially, and environmentally useful product manufacture. (7)

In Sandwell, in the West Midlands of England we described a health dividend – through which harmful industries like tobacco retail, processed food and alcohol could be converted to healthier production and services.  (6,8,9) The King’s Fund later expanded the idea of the health dividend, essentially describing the corporate citizen role of health services. As a major employer, landowner, procurer of goods and services, the NHS has a major role in practicing what it preaches to create better health and economy. (10)   It has risen to this challenge most recently, and with great ambition, in the Net Zero Carbon strategy. (11)  By the same score, manufacturing industry can be diversified towards more human-centred technology, meeting the needs of people with disability, an inclusion dividend (12,13); It can also be diversified to prevent climate breakdown, the green dividend. (6,9) The Million Climate Change Jobs campaign (14) and Just Transition (15) exemplify the action required to convert to a healthier, greener economy.

We need to convert from our fossil fuel addiction- replacing the ‘extractive economy’ with the ‘regenerative economy’. (16) The million climate change jobs is expanded to 20 million jobs in the latest UN statement (15). 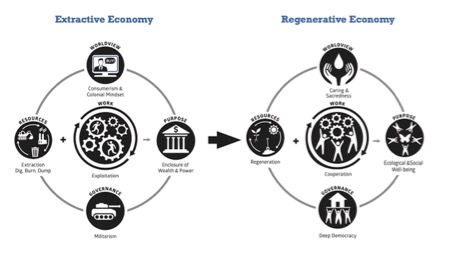 Calls for conversion plans have been part of the response to the UK government’s next generation Trident nuclear missile development. Marine renewable energy systems featured strongly as alternative uses for the naval dockyards of Devonport, Faslane and Barrow (18,19,20).

After the Cold War, major defence manufacturers talked of diversifying their product base to civilian uses. Most manufacturers found a stopgap in exports of armaments to Third World countries, fuelling further conflict and indebtedness. Diversification was avoided by acquisitions and mergers, like that of Lockheed-Martin, and by British Aerospace, which is now 95% military dependent. The first Gulf War provided a showcase for new ‘Smart’ weapons. (6, 21) Global military spend began to climb again in the late 1990s, and through the Bush, Obama and Trump years.  US spend accounts for over 800 billion dollars, the same as the next 9 countries put together. (1) 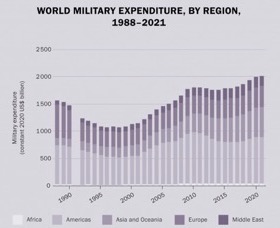 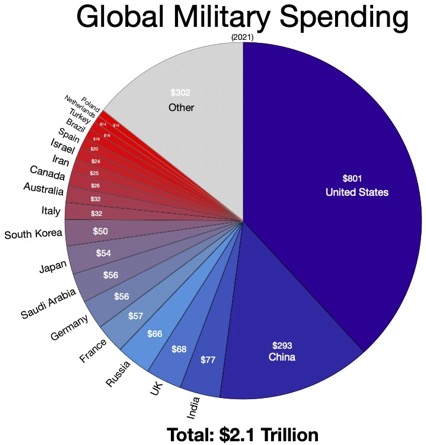 The Ukraine war has provided a shop window for new military hardware and brought in new players to the global marketplace, South Korea, Iran, Turkey, Latvia, Poland. Conventional Cold War armaments and military strategy have been found to be cumbersome, outmoded, and vulnerable to remote, drone-based, and loitering munitions. (22,23) 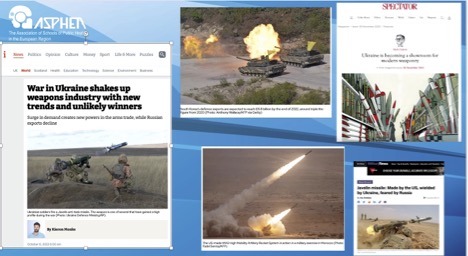 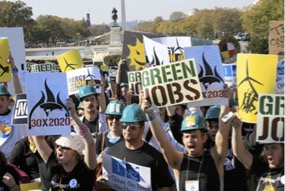 The advent of remote and drone warfare may create an illusion of machines destroying machinery, but the reality is of harsh, human, mainly civilian misery, mundane and medieval, through cold, privation and starvation. Wars continue to be fought in the Middle East and Africa and repressive military force is deployed in numerous other internal conflicts. War remains a major cause of human suffering and must be addressed by the public health community. (24, 25) The preparation for war still needs to be addressed through conversion of military technology and the economy for peaceful, socially, and planetarily useful purposes.  Decisions about what investment is made for societal benefit are political decisions. Production lines to build tanks can be converted to producing tractors. What kind of economy we have is determined by what governments are willing to pay for. At the moment, our politicians determine the profit for industry, is in repressive and destructive technology.  We can therefore only expect military spend to keep growing, and the prospects for health and the planet appear bleak. Du Bois also said, ‘The cost of liberty is less than the price of repression’. We can, and must, convert our politicians’ mindsets, and convert our economies, and plan for an outbreak of health.

This paper is based on a presentation, Militarism and health, November 30th 2022 as part of the University of Bielefeld and ASPHER series, ‘Public Health in times of War’. Details available at https://www.aspher.org/download/1242/seminar_series_public-health-and-war_06-10-22.pdf