President's summer message July 2022: Brexit is bad for your health 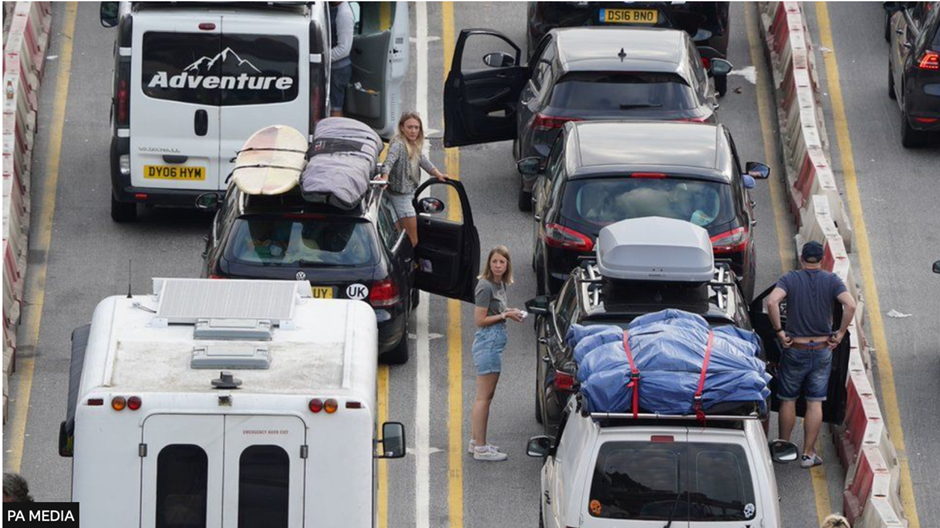 June 23rd marked the six years anniversary of the United Kingdom vote to leave the European Union. In June 2016, the UK Faculty of Public Health was one of the few members of the Academy of the Medical Royal Colleges, to make a public statement on the benefits to  public health from staying in the European Union. It is timely for us to revisit that statement. We argued that the European Union was above all, a force for peace and of major importance to us for its economic benefits. We reflected on protections, for employment rights, for the environment, for human rights and trade. We reflected on the benefits to our health and social care services, for agriculture and work in other key sectors of the economy. 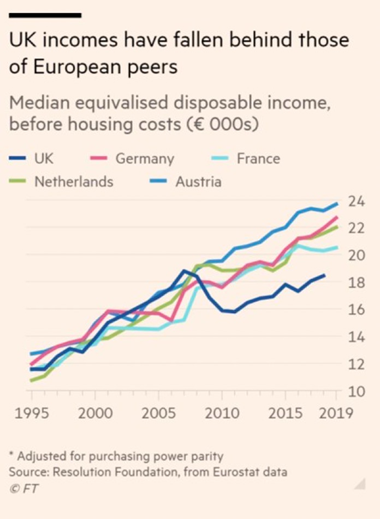 Did anyone really expect war to ignite again in Europe? Was anyone aware of the tangled web of Russian interference in Brexit and the role of corruption in big data management  to subvert elections, for Brexit, Trump and more subsequently? All the dire ‘Project Fear’ predictions for the British economy  are coming to pass.

In the years after the Brexit vote, we have seen the destruction of British democracy, the further impoverishment of the poorest people, who voted for Brexit, cost of living rises greater, and average earnings £8800 less than those in France and Germany. Incomes have fallen behind those of European peers and GDP per capita has grown less strongly than  European counterparts.

Income inequality in the UK is now the highest in Europe.  This widening of inequality between rich and poor, comes as the austerity policies of the 2010s reduced the spending power of the very poorest, notably women in the north of England, at a time when life expectancy went down for these people. 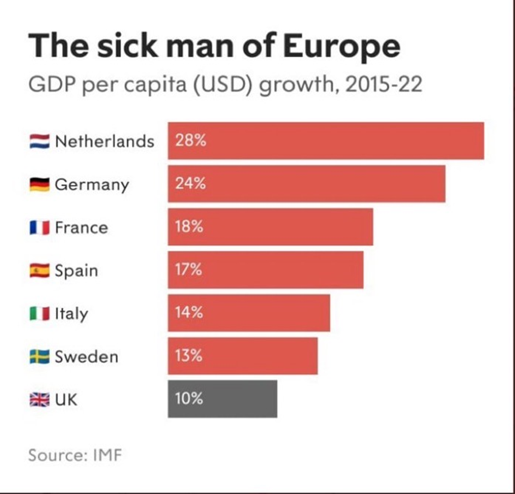 Despite policies allegedly aiming to  ‘level up’ conditions in the north of England, the government has postponed publication of an inequalities (‘disparities’) strategy and the gap between north and south has widened. In the meantime, we have also seen the UK continue its trajectory towards ‘Singapore-on-Thames’; UK has expanded its number of billionaires, and their collective wealth has risen by £253 billion in the last five years. The haemorrhage of wealth, from poor to rich is visible, palpable, you can taste the inequality. We are a land of Ferraris and food banks.

According to the OECD, cost of living increases in the UK have not been higher than European union counterparts for the last year to May. (Figure 4) different factors explain the wide range of inflation 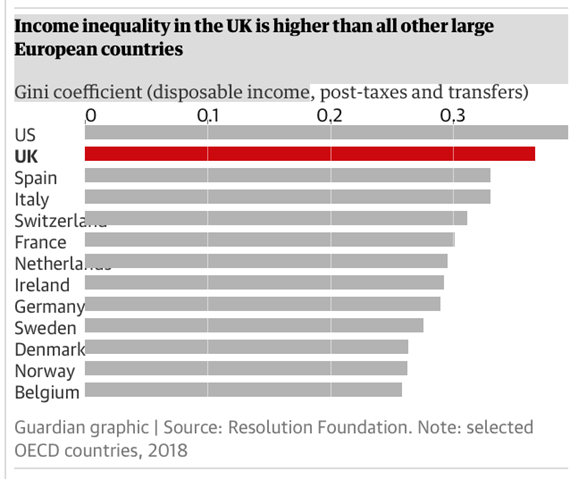 across 23 countries.  However, although holding a  mid-table position,  Brexit explains  a large portion of UK inflation,perhaps as much as 80%, given the price of imports, the cost of transport givenmassive hold ups at major ports, and the shortage of labour driving up wages. 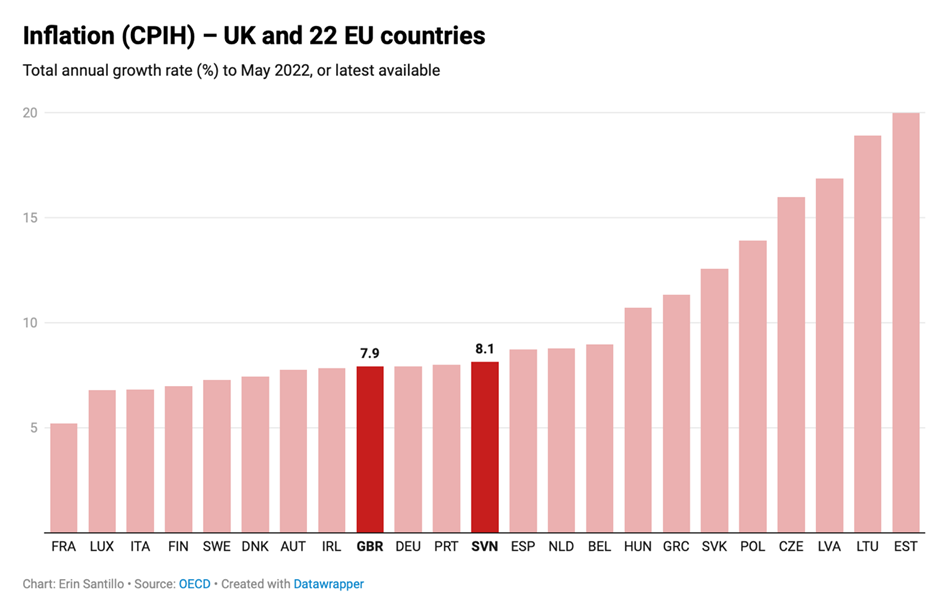 Former Sainsbury supermarket chain boss says 40% of all produce is imported from the EU and inflation ‘took off with Brexit’.  The Resolution foundation report, The Big Brexit says Brexit is making the cost of living worse in the UK.  Exporting from Britain is becoming more difficult and the balance of payments deficit is becoming greater. (Figure below: FT, June 30th 2022)

All the Trade and Cooperation agreement rules for monitoring and controlling imports and exports, between the UK and EU have not yet been implemented.

So we could yet experience even worsening conditions. Agriculture has been sold out in a succession of derisory trade deals with Australia, New Zealand and Japan, all made by PM-hopeful Liz Truss. Nobody, least of all, New Zealand is quite sure why she is so proud of these deals which are so damaging to British farmers.

We have witnessed the debacle of new trailor parks and truckstops since the winter of 2020, even before Brexit kicked in. The terrible conditions experienced by truck drivers are now being extended to holiday makers and private vehicle drivers. This weekend has been the first time when it has been possible to test capacity of the Port of Dover to handle the new requirements of the Brexit border - and it has been found disastrously wanting, an insanitary nightmare, and a massive inconvenience for thousands of people.  It was predicted, and plans were not funded by the British Government. A succession of ignorant, incompetent and dangerous statements by British ministers has been captured by the ever brilliant Led By Donkeys. Now they are pursuing a juvenile blame game instead of constructively working with French colleagues to fix it. (Figure below: Trucks tail back, above the White Cliffs of Dover)

The British government’s new bill to overturn the Northern Ireland protocol is just another example of the present leadership’s willingness to renege on international deals and adds to the distrust of my country.  It also jeopardises the Good Friday Agreement and brings into question continuing British involvement in the Horizon research programme.  Ironically, it is a case of ‘if it ain’t broke don’t fix it’, as Northern Ireland is the only growing economy in the UK outside London, with the benefits it enjoys from trade with the EU.

We have also seen the erosion of environmental standards in our agriculture, air, land, and water management.

The culture of greed and self-advancement that Johnson leaves behind was led from the top, but we cannot expect any less duplicity, competence, honesty and care from the successors.  Most optimistically perhaps, as Jonathon Friedland observes, everything tainted by Johnson lies  needs to be undone, that includes Brexit.

Another Brexit consequence is  a new threat to UK Human rights. The UK government doesn’t want to stay with the European Convention of Human Rights, which is a tragedy, given the UK involvement in its establishment after the Second World War, to protect all our rights. What was it for: 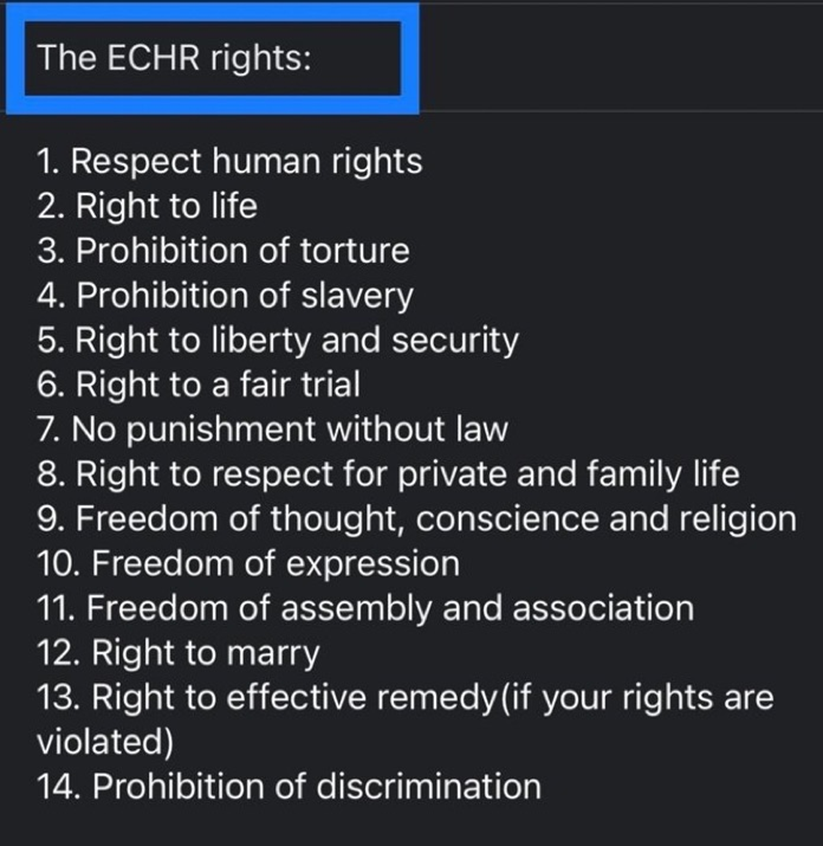 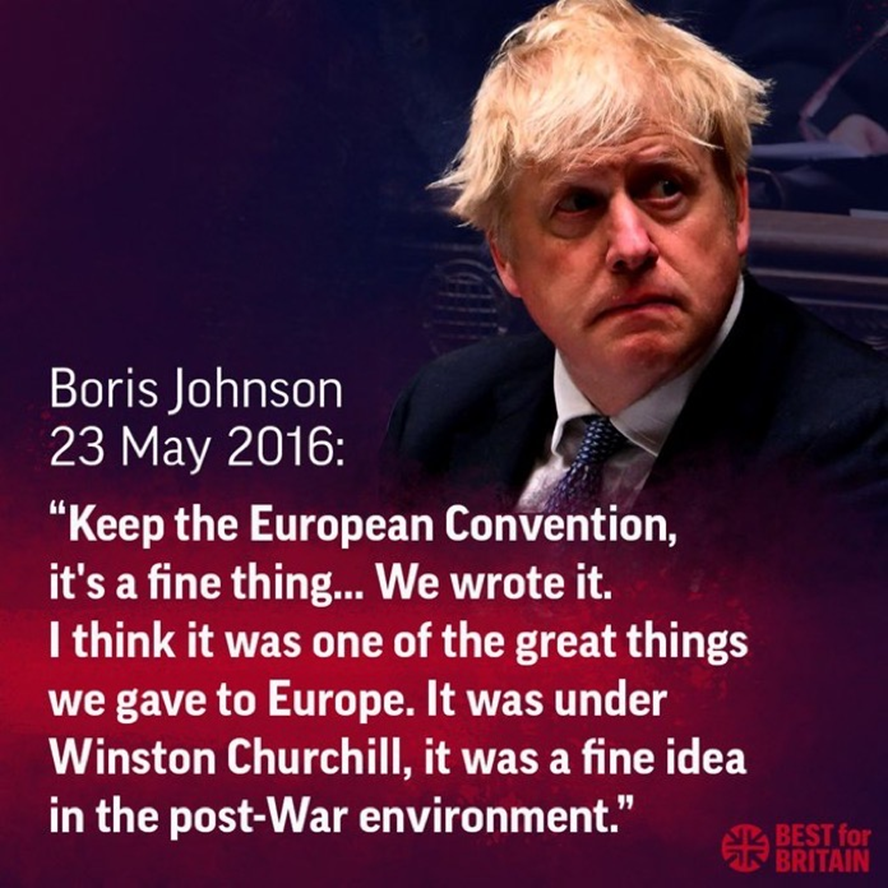 And it is the more ironic given Johnson’s love of Churchill and apparent commitment to the ECHR back in 2016. When you look to the implications of  Roe v Wade, you can see where it is going  (please see my summary blog).

We can hope for better times and better collaboration with the European Union, but we cannot exactly be optimistic that this will happen anytime soon. Happy holidays.