President's message for July 2022 - Groundhog Day: Climate emergency is with us again 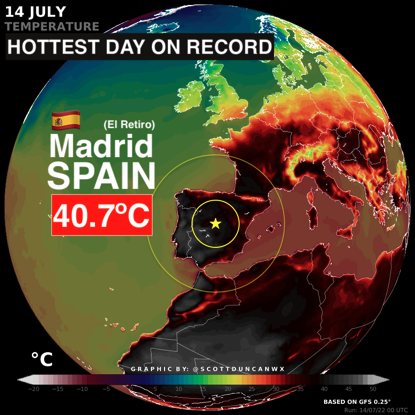 Climate emergency has arrived in Europe, with this week seeing record breaking temperatures. An extensive twitter thread by Politico EU environment correspondent, Karl Mathiesen provides an awesome, more wide ranging and dynamic view of the heatwave crisis in Europe. Spain, Portugal, and France have been badly affected by extreme heat, with fires raging, 360 heat-related deaths recorded in Spain on July 16th and 238 deaths in Portugal between 7-13th July. 14000 people have been evacuated from the French Region of Gironde. There are extreme weather and fire warnings in Italy, Greece, and Morocco. The Meteorological Office for the United Kingdom, has issued its first red warning for 40-degree temperatures. This is the first time the warning has been issued and reflects the expectation of the highest ever recorded temperature in the UK, passing the record of 38.7 degrees set in Cambridge in 2019. The Fire Information for Resource Management Systems, by NASA shows the planet on fire from Australia to Siberia, the Amazon to Alaska (Figure 1).

The signs of climate disaster have been building in the northern hemisphere since the spring. In India and Pakistan, extreme heatwaves saw temperatures hit more than 45â"? in May, disrupting their already strained healthcare systems due to ongoing confirmed cases of COVID-19. Spain and Portugal also experienced temperatures breaking 40â"? in May, with a second heatwave hitting Spain in June. We have been hit, like the metaphorical frog in the slowly boiling water, failing to recognise the deadly change in our surroundings.

The root cause of these high temperatures is climate change, but land use changes, vegetation change, irrigation, air pollution, and other changes also drive local and regional trends in heatwaves. The cost of extreme weather events is disproportionately borne by the world’s poorest people. Unexpected temperature spikes impact on our individual health with surges in hospital admissions from heat related illness. In many parts of the world, there is literally nowhere to hide from the heat, millions of people, particularly in South Asia, work outdoors where there are  ew ways to find relief.

High temperatures are reducing crop yields, causing critical food shortages. India reported an expected loss of >500 kg of wheat per hectare of its April’s yield due to higher than usual temperatures. Disruption to food supplies has already been compounded by the conflict in Ukraine. The 2022 Global Report on Food Crises estimates that about 180 million people across the world will face severe food insecurity from conflicts, weather extremes, and pre-existing and COVID-19 related economic shocks. The existing strategies we have for food are becoming increasingly irrelevant as climate change continues to cause upheaval to fragile agri-food system.

A role for the public health and health services community

The new heat extremes require the public health and health service community to adapt and respond, to mitigate and prevent.

In this week of extreme heat, the public health and health service role in response to major disaster is the most immediate and obvious. Local heatwave plans have been activated in the UK. Many European countries have registers to protect the vulnerable enshrined in their plans, among them, France, after their 2003 national disaster, and Belgium. The City of Rennes provides an example. In the UK, some see advice on protection for individuals as obvious or facile; ‘it is the summer’ they say. TV pundit and climate sceptic Jeremy Clarkson has attracted ridicule for twitter comments on summer in the south of France. Nostalgic talk about ‘how we survived the heatwave of 1976’ has been countered by NASA global heat anomaly maps showing just how much the world has heated up since then (Figure 2). 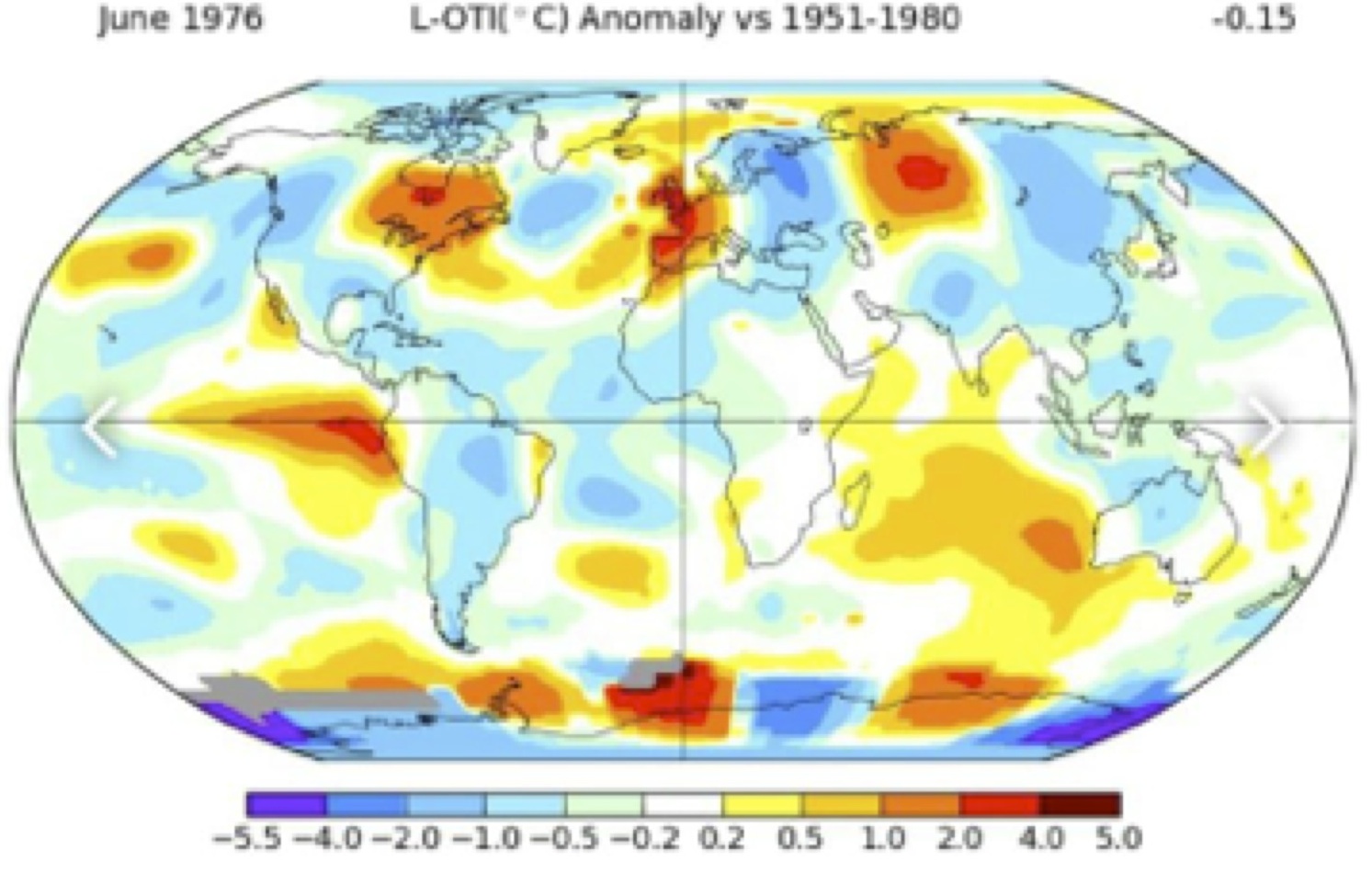 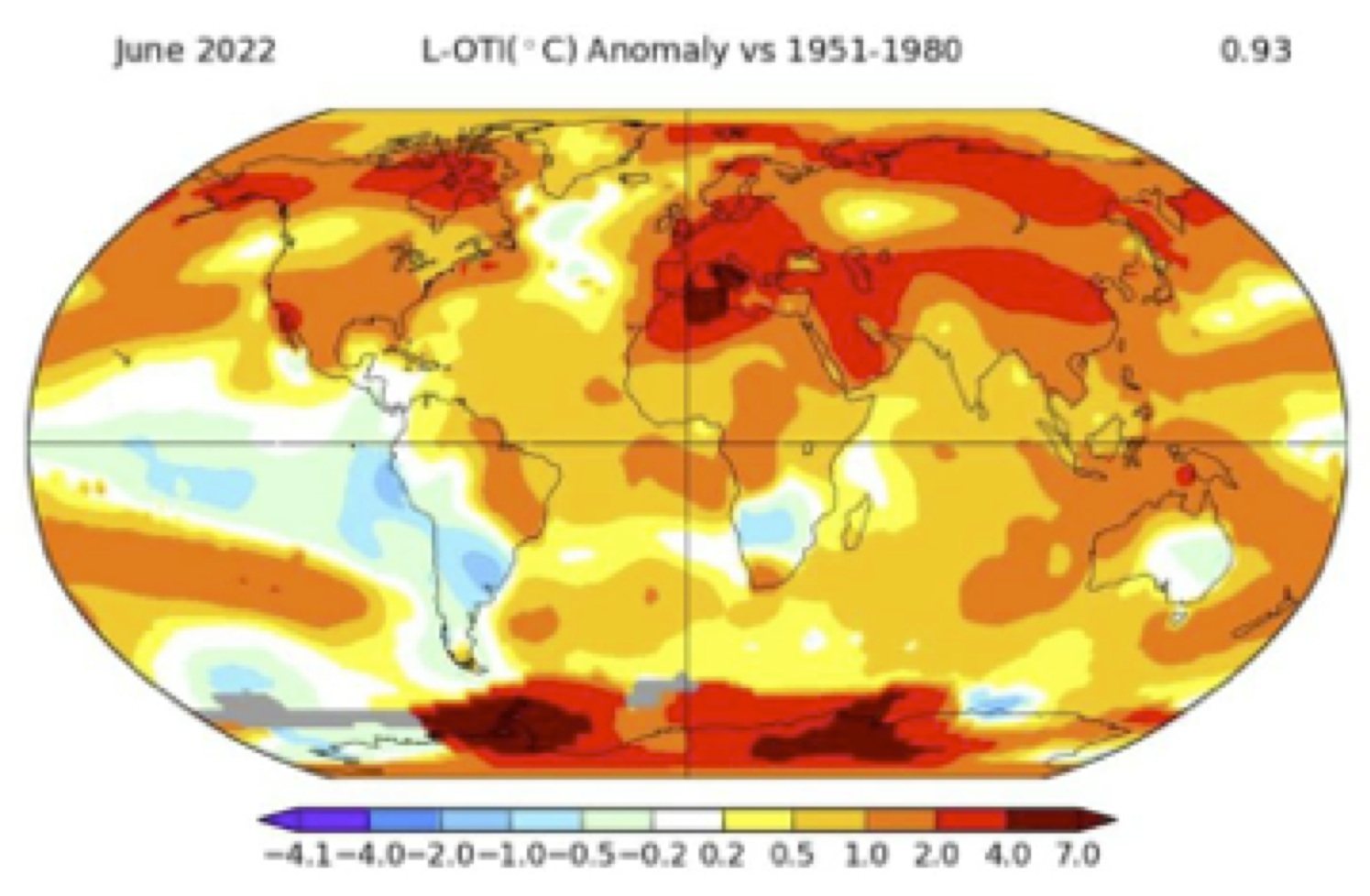 Is ’common sense’ common? Advising individuals to close windows and curtains during the daytime and throw them open at night is not intuitive for everyone in the UK. Belgian fire fighters are allowed to wear shorts when the temperature exceeds 28 degrees; sensible-obvious? We should all eat cold and watery food. And sip water. And avoid alcohol. But do we? 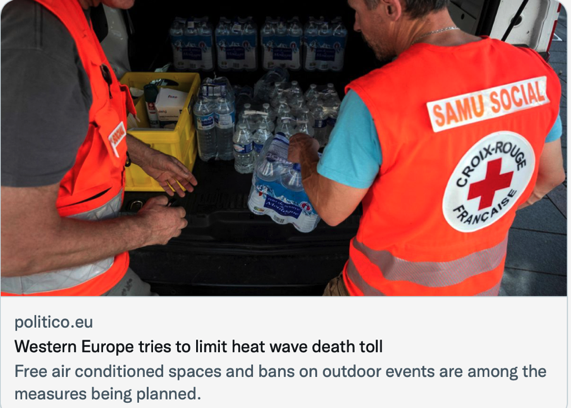 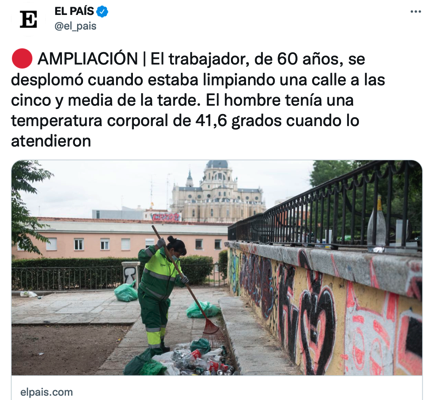 For health systems and other public services, the heat presents complex and compounding challenges. In France, nuclear power stations require river water to keep them cool – but the river water is over-heating, leading to a need to reduce power generation, adding to costs for power generation.In the UK NHS the pressure on ambulance services brought about by the latest Omicron COVID wave is extending the time sick people are exposed to extreme heat in ambulance queues. Power outages, melting of transport infrastructure and impacts of extreme heat on essential workers all need to be planned for and mitigated. Public authorities with air-conditioned spaces, like libraries and community centres are being encouraged to stay open longer hours sadly, in the UK many of such community facilities have already been closed through austerity cuts. Public authorities also need to protect the health of their staff – a street cleaner who died in Madrid this week had a body temperature of 41 degrees.

Adaptation and response are necessary in the face of the immediate threat-but they are not the long-term answer. The recent IPCC report shows that limiting global warming to 1.5°C is virtually impossible unless there are immediate, dramatic changes. Climate emergency will not be tackled unless there are fundamental reductions in burning fossil fuels. There needs to be a renewed commitment to global reductions beyond the levels agreed in Glasgow.

Beyond international commitments by governments, health services and public health systems must play their part reducing emissions and climate impacts; if health services were a country, they would be the fifth biggest producer of carbon emissions.Health services are major uses of energy, in buildings management and transport, and major carbon emitters though prescribing and clinical reagents. Anaesthetic gases are important greenhouse gases. The UK NHS commitments to net zero carbon are a beacon for what all health systems should be aiming for. Public health and health services are also important advocates for climate change policies with the public and patients they meet, and in their roles in wider public advocacy. Health professionals need to be better prepared and informed for this vital role.

Global health challenges require multidisciplinary efforts if they are to be successful; this public health problem needs the insights of climate science, international law, economics, and political science, in addition to the traditional health sciences. The EU Health Policy Platform Climate-Health Working group, led by ASPHER, has recently called for climate-health education to be included as a priority in public health and health competencies for academic institutions and continuing education of health professionals. Schools of public health can use the curriculum ASPHER has adapted from the Global Consortium for Climate Change and Health Education.

COP26 in Glasgow allowed the world to drift backwards on climate action. Candidates for the next prime-minister of the UK have no plans to tackle climate breakdown or even immediate consequences of the heatwave. 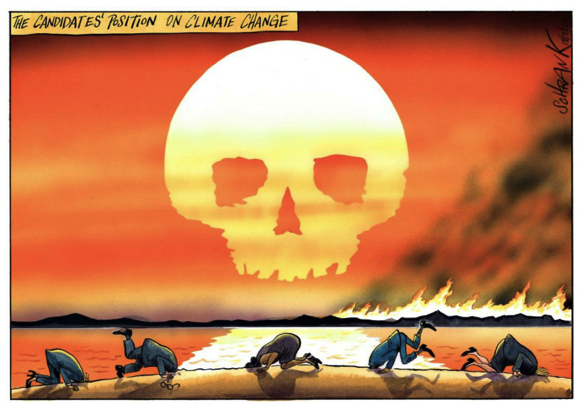 The outgoing nominal ‘caretaker’ prime-minister Boris Johnson held a party instead of attending the Cabinet Office, ‘COBR’ emergency planning meeting on Saturday – no change there – and no ‘care taken’. The best policy decisions being taken by European governments at present, are win-win policies addressing the cost-of-living crisis, addressing the heatwave, reducing fossil fuel use in the face of increasing scarcity and cost due to the Russian blockade, and protecting our populations against the continuing threat of COVID. Working from home is a policy that hits them all. 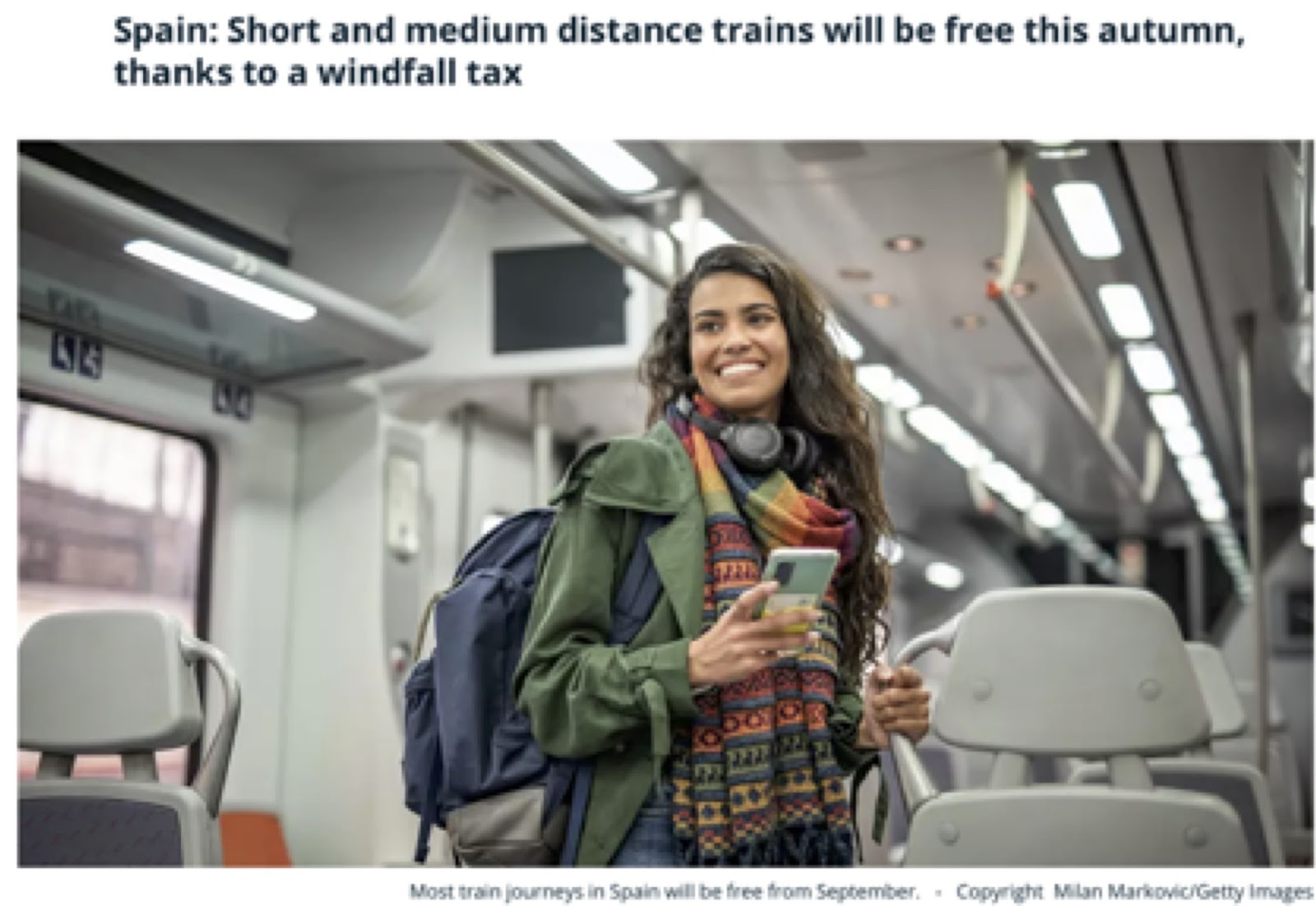 Spain has made the costs of short public transport journeys free and will extend this to longer journeys in the autumn. France and Germany have reduced the costs of public transport. France has re-nationalised its Electricite De France and restricted cost increases to the consumer to 4%. Ironically, its British customers are now subsidising the French ones, paying the full 64% premium on their energy. In many countries in Europe, there has been widespread expansion of the supply of domestic heat pumps providing renewable energy.

The smashing of heatwave records is now a re-occurring Groundhog Day. We drew attention to this last year, in a BMJ opinion piece, and in my summer newsletter blog, ‘Welcome to the climate crisis season’. We should be concerned that heatwaves are becoming more frequent, happening earlier and earlier each year, with higher temperatures every time. Meaningful climate action is needed now to protect the planet and the health of future generations.